Books 50 (Superfreakonomics by Stephen Dubner and Steven Levitt), 51 (Death’s Daughter by Amber Benson) and 52 (The Book of Human Skin by Michelle Lovric) have been read.

My initial impressions here pretty much held up.

Superfreakonomics was interesting, although, having heard several of the ideas from the book on the Freakonomics podcast and being a sequel, it didn’t quite have the same spark, the same sort of joy at the quirky insights that the first Freakonomics book did (Think Like a Freak, the third book, is on my bookshelf to read at some point).

Death’s Daughter was good fun and had certain charm to it. I’m certainly going to try the next book in the series at some point (once I’ve cut a little bit more into my backlog).

The Book of Human Skin, while not a bad book, didn’t quite shine for me. I had a couple of niggles with it, mainly stemming from the book being made up of five first person accounts that seemed to be presented, at least in my reading of it, as written accounts. There’s nothing inherently wrong with the approach, but there are some oddities with it. The main one for me being that one character is a semi-literate valet from Venice. As semi-literate his account is full of phonetic spellings and misused words. Yet why would an account that would be supposedly originally written in Italian and then translated for the reader into English be full of English phonetic spellings? It’s also written with a tone of voice that invokes more the traditional portrayals of Victorian English lower class. So it just ends up creating a dissonance between what’s presented and what its supposed to be. Perhaps if I’d read it at a different time I would have enjoyed it more, I wouldn’t have noticed the oddities, or maybe I’d have noticed them and discarded them without a care.

Book 54 of the year is Blaze by Richard Bachman/Stephen King and 55 is La Prisonneire by Malika Oufkir and Michelle Oufkir. Book 56 is a secret for the moment as it’s research for the next Vasini Chronicles novel.

Based on my current reading rate, I could end up hitting 58 books by the end of the year. Which means that the 293+ unread books on my shelves may get read in 5 years rather than the 5 1/2 years it was looking like was going to take.

We went to see Arrival at the weekend. Really enjoyed it. I had been a little sceptical going in, but the movie sold itself to me.

The City Between the Books & The Bridge People has been out for two weeks now. If you haven’t had a chance to take a look at them, you can find the book for the low, low price of 99p on iBooks and Kindle.

The sample on iBooks is from The City Between the Books and the one on Amazon is from The Bridge People, so you can get a flavour of both stories.

As I write this section at 12.45pm on Monday 28 November (with Twin Peaks Episode 17 playing on the TV, should you be interested), Scrivener is telling me that I’m 95,397 words into the Vasini Chronicles II, which means that I ‘only’ have 44,603 left to write of the first draft (assuming I keep to my revised target).

The final book won’t be 140,000 words. It will be shedding many words in the early edits. Unfortunately, sometimes you have to write words to get to the words that will actually be in the book.

I seem to be picking up a little steam with it, but whether I’ll be able maintain my current rate remains to be seen. Either way, the hope (and I stress the hope) is to have a draft finished by the end of January. Wish me luck.

Don’t forget to wrap up warm and remember your emergency spoon.

They’re here…The City Between the Books & The Bridge People – my two new short(ish) stories – are now available to buy as an eBook on Kindle and iBooks. (As always, for those outside of the UK, please try your local Amazon or iBooks store.)

In The City Between the Books, Lex’s time at university isn’t going well and, on a cold November morning, things get worse. Searching the stacks of the university library, Lex finds that the books can lead to strange places, places that are maybe better left unexplored, especially if she wants to finish her essay on time.

In The Bridge People, Hannah’s summer holiday has been spent exploring the woods and learning games from her grandparents. However, when her mother falls ill, Hannah goes on a quest for chicken soup in the hope that it will cure her. But, to get the soup, she’ll have to cross the bridge to the shop. And there are things beneath the bridge. Horrible things, worse than any of her fairytales, who scare even her mother.

For those who haven’t had a chance to read The Silver Mask, you’ll find an excerpt from the novel in the eBook as well. 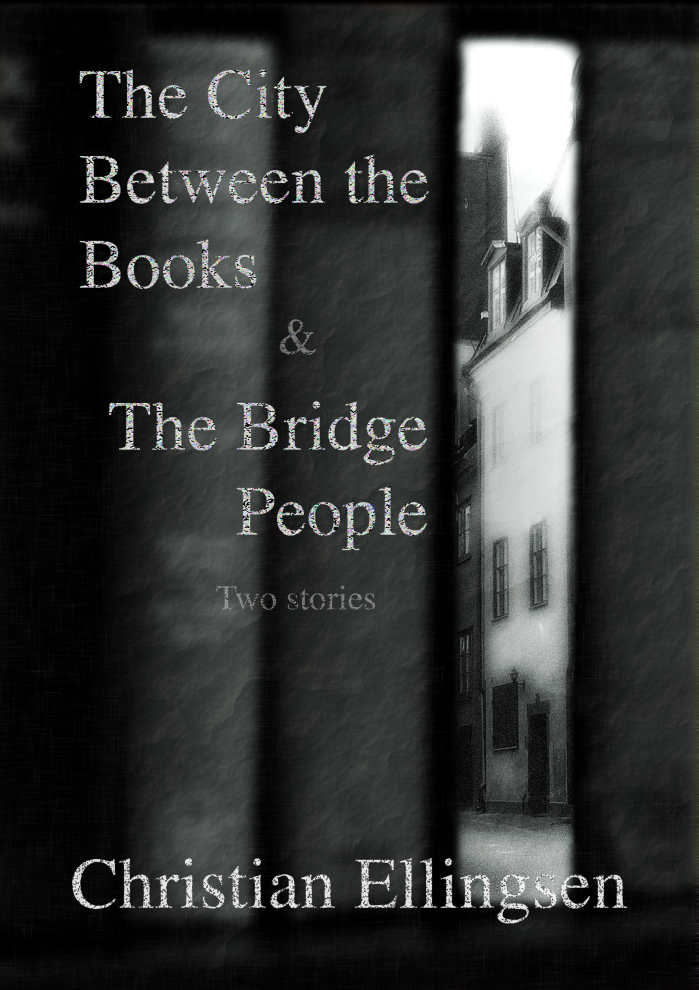 Note: I originally started writing this post on 3 November, and that’s the date you’ll see at the top of the post. I’d intended to finish writing the post on 3 November as well. However, my memory had other ideas. I’m traveling about a bit this weekend – visiting people and doing my nerdy pastimes. Unfortunately, I managed to leave behind the cable to my laptop. A quick rush to an Apple store on Friday morning to invest in a spare cable (one that can live in my suitcase and travel round with me when need be) has rectified the situation and I’ll be able to do some writing. It does mean, though, that this post that is claiming to be from 3 November will have been written in stolen moments over the weekend while nerding it up.

Over the next two weeks, I should finish reading my 50th (Superfreakonomics by Stephen Dubner and Steven Levitt), 51st (Death’s Daughter by Amber Benson) and 52nd (The Book of Human Skin by Michelle Lovric) books of the year. Given that I’d originally planned to read only 26 books and there’ll still be a little over a month of the year left to read some more, it’s not bad going. At the very least, it will mean I’ll have cut a little bit further into the 300+ unread books that were sat on my shelf at the beginning of the year.

So far Superfreakonomics is proving to be interesting (although I’m familiar with some of its contents thanks to listening to the Freakonomics podcast). Death’s Daughter is entertaining and – as I’m only a handful of chapters in – I’m looking forward to getting deeper into its story. The Book of Human Skin is tending to be a bit more of a struggle than the other two. I find that books tend to set their own reading pace, and this one’s pace is a little slower than others I’ve read recently.

Work on The Vasini Chronicles II is progressing. I’m about 80,000 words into the first draft. This draft will likely end up around 140,000 mark, but will need to be cut back quite severely. There are some parts that I already really like, there’s other bits that will need some work, and there will be some bits that are likely to disappear very early on in editing and will never be heard of again.

I’m also editing a novella set in Vasini. It will, if all goes well, make an appearance around the middle of next year alongside a short(ish) story also set in Vasini.

And speaking of releases, don’t forget The City Between the Books & The Bridge People – two short(ish) stories – are available to pre-order as an eBook on Amazon and iBooks and will be available to buy from 14 November. They’re also accompanied by the first chapter of The Silver Mask, all for only 99p (in the UK. For those outside of the UK, please check your local US, Australian, New Zealand or EU-based Amazon or iBooks store for pricing.)

The City Between the Books & The Bridge People – my new little ebook of two short(ish) stories – is now available for pre-order on Kindle and iBooks.

It will be published on 14 November.

In The City Between the Books, Lex’s time at university isn’t going well and, on a cold November morning, things get worse. Searching the stacks of the university library, Lex finds that the books can lead to strange places, places that are maybe better left unexplored, especially if she wants to finish her essay on time.

In The Bridge People, Hannah’s summer holiday has been spent exploring the woods and learning games from her grandparents. However, when her mother falls ill, Hannah goes on a quest for chicken soup in the hope that it will cure her. But, to get the soup, she’ll have to cross the bridge to the shop. And there are things beneath the bridge. Horrible things, worse than any of her fairytales, who scare even her mother.

For those who haven’t had a chance to read The Silver Mask, it also contains an excerpt from the novel.

I’m in the final stages of preparing The City Between the Books and The Bridge People – two short(ish) stories that will be published jointly as an eBook in November (you can see the front cover in my previous post) – meaning that I’ve hit the most anxiety inducing stage: the final proofreads.

Over the next while I’ll be making sure that all the typos are picked up, there are no rouge elephants (as once appeared in a draft of a friend’s history book, and is still my favourite typo) and that it at least appears that I have some rudimentary understanding of the English language.

It’s not about content at the moment, it’s about finding the stupid mistakes. The ones that are honest typos, but which my mind insists that if a reader discovered them would mark me as an idiot to them.

Of course there will be some. At least one always gets through. Even writing that has had a dozen or more people scouring it to make sure it’s perfect will have the odd typo in it. It’s the way of things. They’re sneaky those typos, able to camouflage themselves amongst properly spelt words and correctly placed punctuation.

And that’s just the typos.

There’s always the risk when you’re doing the proofreads to second guess yourself, to start thinking that you should have written things a different way.

Sometimes, maybe, those thoughts are worthwhile. The second guess may actually be better. But most times – at a point when you’ve read it over and over, and others have too, and that sequence on page 17 was perfectly good all of those times before – it really is just anxiety and just needs to be sent to sit in a corner.

Yes, the next few weeks are going to be, well…yeah.

I’ll see you on the other side with a brand new something for you to read.

Although The Vasini Chornicles novels will be consuming my writing life for the foreseeable future, they won’t be the only stories I’ll be working on. I will be – at least I plan to be – making some short stories and novellas available between each installment of the Chronicles. Some will explore the wider world of Vasini, others will be completely independent of the setting.

To that end, this will be making its way out into the world in November: